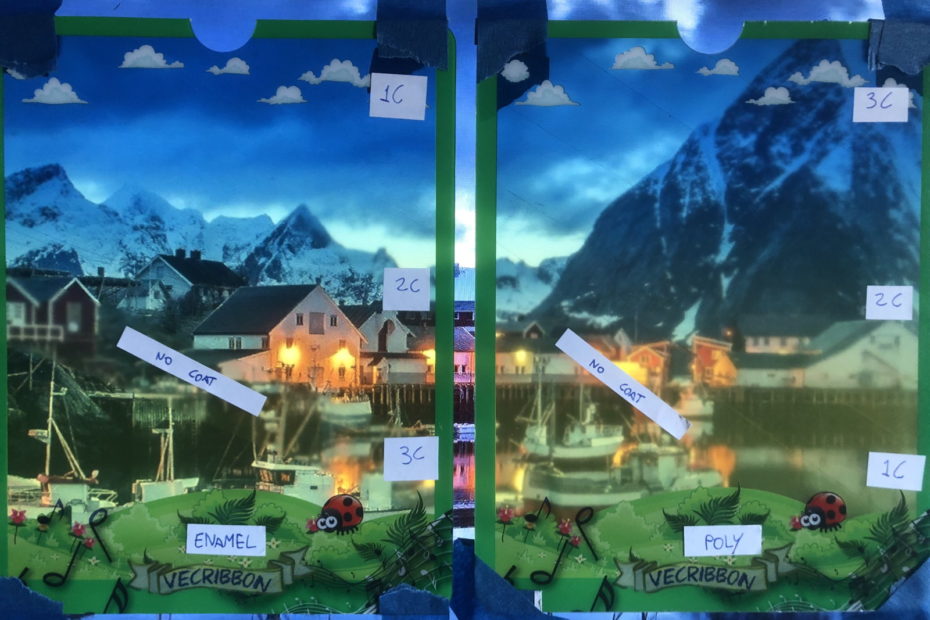 We had hoped to be showing you finished and final overlays by now. However, Oracal film in the colour we want is proving to be difficult to source – because of course it is…

Wanting to explore other alternatives, we looked again at our gradient samples. Scarlet had noticed that if the back surface was dampened with water, the clearness of the overlay improved immensely.

This seemed worth pursuing, so we tried applying clearcoat to the back surface of a couple of samples.

We used 2 different spray can clearcoats to experiment; a polyurethane lacquer, and an enamel lacquer.

In the pic of the back of an overlay below, the thinner diagonal regions were masked and received no coating. You can see the dramatic difference in gloss on the back of the overlay, when compared to unsprayed regions.

Each overlay was masked and given a total of 3 coats of polyurethane or enamel. They were progressively masked so that we could see the effect of additional coats.

In the below two pics, you can see the results. Although even 3 coats of poly don’t quite give perfect clarity, look at the results with enamel!

The red lines have been added to visually break up the areas with different numbers of coats. Note both overlays have unsprayed diagonal areas for comparison.

In both cases, the overlays are taped against a monitor with 6mm offsets at each corner, to give a more realistic impression of the clarity when held away from the screen as on the Vectrex hardware.

Look at the clarity at the bottom-left of the enamel-coated overlay! Do note that the number of coats goes in different directions on each overlay – sorry about that.

OK, time to see these on Vectrex. As expected, the poly doesn’t look very good at all:

But look what happens with enamel:

Wow! Look at the bottom region with 3 coats. Not bad, huh? You can really see the improvement in the video below. Note that it’s only the bottom part of the overlay which has 3 coats.

The absolute key takeaway from all of this is that the clarity of the overlay depends entirely on the glossiness of the back surface.

Of course, this progress introduces more questions. Our homebrew efforts have just used spray cans, in cold and non-ideal conditions.

With 3 coats of enamel, although the additional thickness of the overlay is imperceptible in the hand, the difference has made it noticeably tighter in the overlay holder – not ideal.

Now, it’s possible that the overlay manufacturer would be able to get a much more even coating than us, achieving a higher gloss finish with fewer coats, and probably with polyurethane.

So we have two open questions with the manufacturer which will determine the next (and final?) step in the long-running overlay saga.

These answers will be with you as soon as we have them!